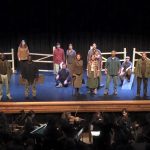 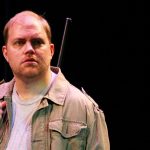 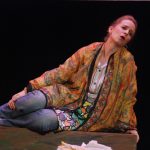 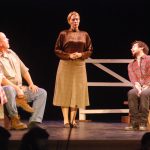 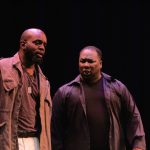 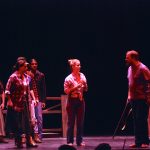 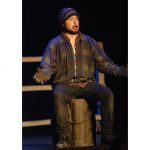 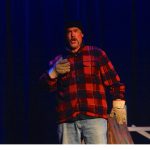 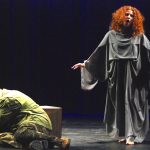 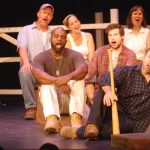 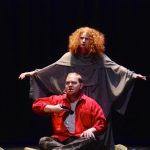 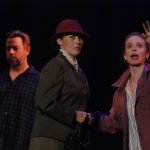 I was reminded that I wanted to write about the wonderful performance I experienced at the Chandler. I know you must be very pleased with the production and cast, which I thought was just fantastic all around. The opera was powerful, and although I’m not generally an opera fan, I was mesmerized and moved by your work. I know what it takes to make a production of that scope come together, and on that front it was a grand achievement. Musically, it was stunning. Congratulations on that wonderful success.–Paul Gambill

I thought it was a SPLENDID event…great musicianship, music, performance, poignant story, thought provoking, raw and sweet and…simply the ‘whole slice of pie’! You both did an outstanding job…what a phenomenal ‘infrastructure’ you provided…I hope you were well appreciated!–Mary Lewis Webb, chaplain with the Veterans Administration in White River Junction

I think you mentioned that people who don’t go to operas would still like this. I am still reeling from the power of the thing. Erik is a musical magician. I knew of David before but didn’t know much about Erik’s work. Thanks.–Dr. Andrew Pomerantz, clinician with the VA

Thank you for the inspiration. It was a deeply cathartic, profound experience for me and for Carl. –Tracy Penfield, dancer and Director of Safe Art

See our two trailers (#1 or #2). A Fleeting Animal, the opera I created in 1999 and 2000 with my friend, the late poet and playwright David Budbill, was first performed in 2000 and then received a second run of performances in a newly-revised version in September, 2015. This latter set of performances featured a stellar cast of singers and the instrumental ensemble TURNmusic, all under the stage direction of Margo Whitcomb and the musical direction of Anne Decker. The opera is set in a small, northern Vermont town in the early 1970’s and is the tragic story of Tommy, the returning veteran who is haunted by his military service in Vietnam, and Grace, the much-maligned single mother with whom he falls in love. It touches on life in small towns, PTSD, poverty and racism, as well as the beauty of Vermont and the joys of the seasons, particularly the short, but vibrant summer. The music includes a number of styles, including the influence of contemporary concert music, jazz, blues and Quebecois folk song. We have now made the video available of the final performance at Chandler Center for the Arts, Randolph, Vermont, September 20, 2015, complete with subtitles. The film and subtitle work was done by Jeff Tolbert.

Here are the Vimeo links:

Act I (Please note that these are very large files and may take some time to load; be patient!)

Read the libretto for A FLEETING ANIMAL.

Here is some recent media coverage:

A Fleeting Animal: An Opera From Judevine – “the brilliant and heartwrenching creation of Brookfield composer Erik Nielsen and Wolcott poet David Budbill” (Jim Lowe, Barre-Montpelier Times-Argus/Rutland Herald) is the tragic love story of Tommy, a recently returned veteran (Adam Hall), and Grace, a struggling and misunderstood single mother (Mary Bonhag). The supporting characters in the rich cast leap straight from the often muddy and messy roads of rural Vermont life. This newly revised production is led by Anne Decker as Artistic Director conducting her ensemble TURNmusic and Margo Whitcomb as Stage Director.

A Fleeting Animal is timeless in its themes: the harm of individual isolation and the possibility of community redemption. Like all great operas, it has passion, humor, and tragedy. With its earthy characters and libretto and music inspired by French Canadian fiddle tunes, the blues, jazz, and other contemporary styles, A Fleeting Animal appeals to a broad audience, including those who wouldn’t normally attend an opera.

NOTE: A Fleeting Animal is a tragedy. It contains scenes that are emotionally intense and realistic. There are four simulated gunshots during the performance. It may not be suitable for all audiences.

(See Blog Posts at the end of this page for more about A Fleeting Animal.)

Donations create the funding that will allow us to put on the new production of this opera. All contributions to support future productions of A Fleeting Animal are tax-deductible to the extent allowed by law. Right Here Productions is partnering with the Monteverdi Music School in Montpelier as its fiscal sponsor. Monteverdi Music School is a registered 501(c)(3) non-profit organization. Contributions may be directed to:

Please put A Fleeting Animal in your check’s memo.

Or if you’d prefer to make a secure contribution online via PayPal, go to:

Please put A Fleeting Animal in the “purpose” field.

Your cart is empty
Visit The Shop

Site designed and hosted by ekaBOX