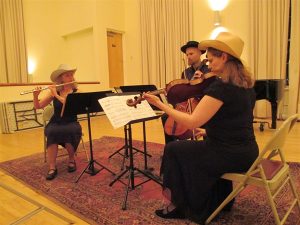 This past week I was treated to three lovely performances of a program of 21st century music. The musicians were the Passeri Trio. Its members, flutist Lisa Carlson, violist Elizabeth Reid, and cellist Michael Close, prepared and performed music by Michael Isaacson and the late Sylvia Glickman, but also played works by three living Vermont composers. The trio premiered Mike Close’s Tombstone, guest pianist Alison Cerutti gave the first performance of Dennis Bathory-Kitsz’s Scalar Rainbows. My own Another Take (for solo cello) and Voices in the Wind (for flute and viola) were on the program as well. The concerts were well performed, enjoyable, and enthusiastically received by the audiences.

This made me reflect on how fortunate composers in Vermont are in one important respect. We live in a state where many musicians look on performing works by local composers as part of their mission. Vermont is not a state with a lot of economic advantages and that is as true in the arts as in any other sphere of activity. But its small and primarily rural character as well as our harsh winters and economic difficulties have helped create a sense of interdependence that has fostered many opportunities for us composers to be part of the wider community. While our economic situation is far from ideal and there are musicians who are still resistant to performing new music, there are many individuals and ensembles eager to play our works. I am grateful for their adventurous spirit and courage.

Site designed and hosted by ekaBOX